This whole campaign I wanted to get behind where they're trying to find their own little heroes, which is such a worthwhile thing at the moment because it's all about kindness and celebrating children's achievements
Katie Piper – Author, Broadcaster & Activist 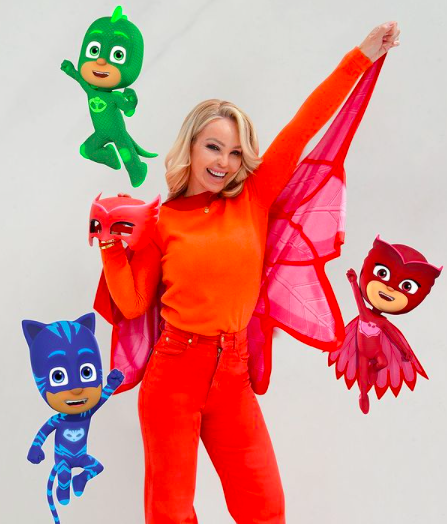 Not all superheroes wear capes and Hasbro/eOne put this theory to the test by setting out on a mission to find the UK’s biggest little superheroes in celebration of National Superhero Day 2021.

Celebrity author, broadcaster, activist and PJ Masks superfan Katie Piper issued a Catboy call to parents across the land asking them to share stories of their ‘everyday little heroes’ bravest moments on the specially created microsite www.pjmsuperheroes.co.uk for a chance to win fantastic prizes from official retail and licensing partners including Smyths Toy Superstores and Butlins.

Reporting for duty on press day, Katie Piper appeared on Sky News on the 20th April 2021 for a 5-minute-long interview that reached 4.5 million viewers and that was later syndicated to Yahoo News Online.  Our inspirational campaign ambassador was interviewed by 14 national and regional radio stations reaching a listenership of 6 million and she later spoke to celebrity news web site Heat World (Online readership: 1.06m) and women’s weekly lifestyle magazine Best (Circ: 84,130) who published a double page spread.

Taking the superhero social, we engaged with 5 additional micro influencers to support the campaign by sharing their children’s own superhero moments through a “Superhero and Tell” initiative. Katie Piper also supported the campaign on her own social, where she boasts more than 1million+ followers. Media value on social alone was £17,450, with a fantastic overall engagement rate of over 4.4% and CPE of just 11p.

Additionally, a pre-recorded interview with Caudwell Children CEO Trudi Beswick, championing the initiative, was syndicated cross the UK Commercial Radio Network where it played out 441 times across 212 radio stations across the UK reaching a further 5.1 million people.

We are delighted with License to PR’s ability to achieve such a high reach for this campaign and secure coverage across so many different forms of media. The team paid extra attention to making sure this campaign reached numerous touchpoints; securing fantastic opportunities and visibility for the brand.
eOne/Hasbro
WORK WITH US
Go to Top